Look What I grew. Butternut Squash 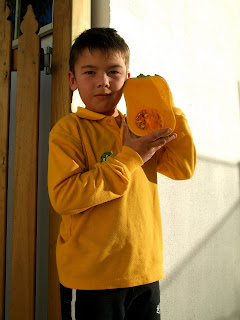 Well technically I grew both of them but it is only legal in this country to eat one of them.

Do I make soup with many rinds of German smoked ham? Scones? Or plainly roasted for hours in clarified butter and olive oil with sage and thyme and a dressing of bottled caesar salad and slivers of crispy proscuitto?

But not today. I am listening to my body and this is it wants. Acutally it wants to snap its fingers and be back at the very top of the Holloway Road eating Makani Dahl and Bombay Saag Alloo and listening to the carefully chosen Jazz tracks Raj will be playing at The Sitara – the best of the high-street Indians restaurants in North London and still going strong 15 years on. Good for them, you had a vision, Raj. Sitara Indian Restaurant 784 Holloway Road; London; N19 020 7281 0649; Hey, all those dishes are v..v…v..Vegetarian.

So, it’s the first vegetarian dish on Crackling. And time for a medium length Aside:

I used to be one. It was 1985, I was at Poole Arts Centre with my mates at a Smiths Gig (James support IIRC) and between the guitar jangling and the plaintive wailings about Manchester and its environs Morrisey spoke directly to us. He told that Meat was Murder. However what he didn’t fit in to his lyrics was that it is also an excellent source of iron, b vitamins and many minerals vital for the nutritional stores-houses of young girls and women. 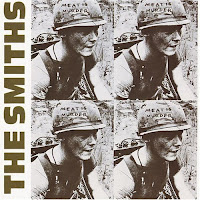 So I “went veggie” Evangelical, wholier than though, awkward, righteous Vegetarian. There followed endless suppers of beans on wholewheat toast with cheese, snacks of wotsits and potato latkes, pyramids of cheese and onion pasties.*** What a donkey.
I since discovered from music engineers and producers who had worked with Morrisey in the south of France that he is somewhat idiosyncratic in his culinary dogma; he won’t have garlic on the premises or butter. And no murdered animals either. They would sneak out for big macs and loaf around the studio with the reek of their forbidden lovers still on their clothes like adulterers just for fun. Also, my friend Nicole swears Morrisey used to come in to a certain Manchester sandwich bar she worked in for tuna melts. How’s he doing these days since Swindon?

Vegetarianism, as Anthony Bourdain proselytises, is very much a first world luxury – to pick and choose one’s protein sources is a privilege. In the early 90s when Mr Wong and I traveled round Malaysia we would trek to a restaurant famed for Ayam Soto Beef Kway Tow, Char Siew or go out to dinner with the many cousins for house-specialities of venison tendon and river flounder and I would sit with with nose turned up and a sanctimonious demeanour prissily picking at pack choi (no oyster sauce). I doubt my actions saved a single bivalve. One day they gave me a taste of my own medicine and took me to the Bhuddist restaurant for a chow-down on mock-duck. Shudder. That’d shoulda oughta taught me.

Vegetarianism in the 80s and 90s, did call attention to the recklessly dangerous standards of animal-husbandry. Many of us spent valuable physical resources denouncing factory-farming and when the headlines were hit with BSE and the charmingly-named Scrapie for sheep, the standards and scales started to change. Plus old breeds re-appeard at the butchers – ah Freemans of Crouch End and your sublime Tamworth Bangers – and latterly the supermarkets.

I still cooked meat for work though, the irony of standing in Leadenhall Market with a 2k bag of best end of lamb neck one winter’s day was not lost on me. 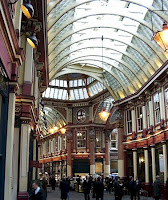 I saw sense in January 2002 after an anaemia-induced spin-out in Toys R Us Colney Hatch and made Mr Wong take me directly to Gaucho, the Argentinian Steak House in Hampstead for lunch (actually it was Uraguayan Fillet steak that day as there was some kind of Latin American Anglo Trade Embargo going on)I have never looked back. At all. And if at all it was to see if there were anymore fibres I could possibly gnaw off a rib bone dropped under the table. And the last time we were in Malaysia with the cousins they had to fight me for a mere sniff of the deep-fried pork hock.

I have friends who are vegetarians for health and karmic reasons. They get on with it calmly and wisely, perhaps having learned from the misadventures of buffoons like myself that there is little or no merit in heckling one’s dining companions. I am still evangelical about eating meat: Eat a little of the best you can afford which has been reared and slaughtered in the best possible circumstances.

So finally I present the recipe for
CURRIED BUTTERNUT SQUASH 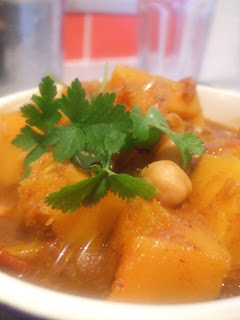 Oh this one is Malaysian, it has curry leaves which are optional, in fact this is really about technique – amalgamating the first ingredients to a fragrant paste.

500g peeled cubed butternut squash, hitherto known as BNSq
20ml oil
half a red onion finely chopped
one clove of garlice minced
a can of chopped tomatoes, drained
I used this mix of spices because it was what I had to hand but you, of course could use your own favourite blend or even a teaspoon or two of pre-made curry paste – the important thing is how one cooks them to release the flavour and turns the whole thing in to a paste: ground cumin, chinese five spice, tumeric and allspice because it really brings out the sweetness of the BNSq
15g of butter or ghee
150ml each of stock and coconut milk
half a can of chickpeas drained
salt
curry leaves
coriander leaves to serve 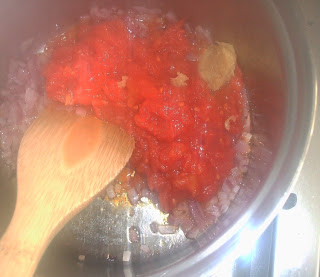 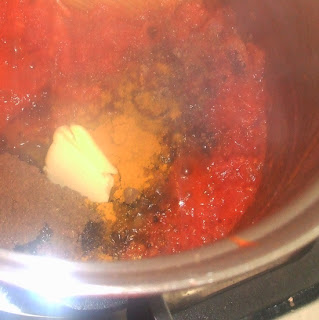 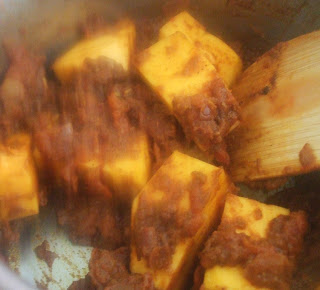 1. heat the oil and fry the onions until translucent and just starting to brown at the edges.
2. add the garlic and the tomato flesh and cook on low heat for 5 minutes stirring well
3. push this mixture to one side and turn up the heat slightly and sizzle the butter or ghee and throw in the spices. You want to toast them properly to release the aromas and if you’re careful you shouldn’t burn them so cook them for at least 60 seconds***
4. stir well to blend it all and cook for 2 minutes then add the BNSq coat with the mixture.
5. add the remaining ingredients, cover and simmer until tender – at least 20 minutes.
6. check seasoning and serve or leave for an hour so the flavours develop and serve luke warm but don’t tell the health inspector.

I am going to serve mine with cauliflower, wilted spinach and lime pickle. If I could face the sheer drudgery of cleaning up my kitchen again today (I am very messy) I would make wholewheat roti to mop up the gravy properly. Perhaps another day.

*** prolific cookery author Rafi Fernandez gives this tip for the faint hearted fryer: Addition of spices when cooking: “always reduce the heat before adding any ground spices as they burn easily which will give a bitter flavour to your dish. I mix mine with a little water and fry them gently until the water has evaporated and the oil separated”
Rafi has dozens and dozens of titles Rafi Fernandez titles

. I wonder why she is so much less-known that Madhur Jaffrey or Charmaine Solomon? What can have gone on behind the scenes?

** actually, whilst I depreciated my iron stocks I did appreciate my stock of original recipes. I do have some absolutely corking Vegetarian Recipes which I will throw in to Crackling as and when the mood takes me. Why, here’s one now!
with the remaining half a can of chickpeas and the tomato juice I whizzed up a hybrid-hummous with olive oil, tahini, salt, roasted garlic and for the necessary zing I fried a teaspoon each of garam masala in oil and poured it in, a techinque Rafi Fernandez calls “tarka”.