Food Sovereignty: Does it matter where your food comes from?

Western Australia is a big, big state. So big that just looking at it on the map gives me the shivers: too vast, it simply cannot be all one territory. . Something else that gives me the shivers is that 90% of all food grown here is exported, leaving 10% consumed across Australia nationwide and a smaller fraction of that food available to local consumers.
Where I come,  a single sweep of a weatherman’s arm taking in 6 EU countries and a myriad of local regions. And where I come from regional identity is often expressed in food; Cornish Pasty, Cumberland Sausage and Bakewell Tart. Sure, they are all for sale in Tesco right across the land but also in the villages where they are produced. The actual hands-on pasty maker can get their product directly to eager, traditional consumers easily via the village shop and more importantly at the Farmer’s Market. Could that ever happen here? Does the average WA consumer have any connection to local producers or are most of her/her food choices made in the third party at Supermarket Central Office?

th Christchurch Grammar School Ethics Centre hosted a forum organised by Slow Food Perth on tackling the question of how we as local consumers can, if at all, connect with local producers. http://slowfoodperth.org.au/2010/08/a-priest-an-editor-a-farmer-and-politicians-food-sovereignty-forum/

Food shopping in Perth Metro is a vastly different experience from shopping in the UK. One learns to stock up at Woolworths, Coles or even IGA for the generic staples. Increasingly one may gasp with delight when artisan producers are included on the shelves next to the Big Guys, for example http://www.turkishbakeries.com/ but generally all we know about the produce is that it once lived in a warehouse by the airport. As a Foreigner one learns that a week’s shopping means visiting several stores and actively seeking 0ut products with seasonality and a connection to the local area. Personally, I like to befriend Butchers: if you show them you are taking time to think about the cuts and animals you are buying they grow quite friendly.

Meat that was the symbol for the issues raised ast night’s Food Sovereignty forum. All the questions asked by SlowFood’s Jamie Kronborg can be mapped out with Meat production and consumption. Jamie’s opening question was “Do consumers Influence Production?”

Let me introduce you to the panel from second left to right:

Anthony Georgeff is editor of Spice Magazine http://www.spicemagazine.com.au/, which is a champion of small local producers. Anthony answered “People are patronised by the big corporations, they who purposefully separate us from the small producers.” He believes consumers can definitely influence producers if given the chance. 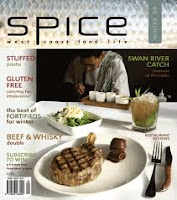 Annie Kavanagh runs Spencers Brook Farm in the Avon Valley http://spencersbrookfarm.com.au She specialises in rare breeds with Berkshire pigs, Long Horned Wiltshire sheep and Dexter cattle all farmed to the highest organic and free range standards. My ears pricked up at the mention of Berkshire pigs I can tell you. Annie has been president of the Organic Farming Association and sells her pork at Mt Claremont and Subiaco Farmer’s Markets. To get her produce to the plates of Perth she has to wear every single hat in the food chain from pig-wrangler to PR specialist. Her biggest challenge is blinkered retailers.
“When we have placed our pork with retail butchers they complain is sometimes too fat, sometimes too lean which confuses the customer. Our pigs live natural, seasonally-driven lives and a winter chop is markedly different from a lean summer one.” It would seem that the customer, used to picking a standard polythene-wrapped pack off the shelf at Coles is mistrustful of anything that doesn’t match the graphic in the catalogue. Annie continued, “Farmer’s Markets are the answer. I can have direct contact with the consumer with the great advantage of offering a taste and an explanation.” Annie, like most of the panel, advocated giving the consumer the opportunity to buy from different systems of production. 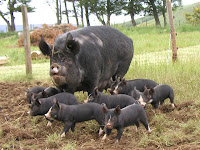 “Food grown somewhere near you is great,” stated Kim Chance, farmer and former Minister for Food and Agriculture in WA. He went on to frame the debate on a global scale: “There are two paradigms in the matter of food choices. Much of the world either gets by on rice and fish or is conditioned through suppression of choice or budget restrictions to buy only what the global food giants are offering. There is, however, still room for the discerning consumer who has access to choice.” He balanced issues by reminding us that globalisation of the food industry as not all bad. He cited Japan as a country reliant on this as it has a GDP of just 1% from agriculture. Being able to supplying the Japanese with food imports benefits WA enormously. We can’t really catigate the food giants while as All Bad when we owe them some of our lucky lifestyle.

The second farmer and politician of the panel ex-Western Australian National Party leader Max Trenorden highlighted the contrasting health issues globalisation of food production has given the world; famine and malnutrition versus the raft of diseases such as diabetes and obesity associated with bad food choices in the developed and developing world. He pointed out that lack of choices, whether it be nutrient-poor staples or trans-fat filled standards is damaging the health of the world amongst both the Haves and the Have-Nots. Max says world food production rates are rising but that didn’t mean the right kind of food was in the right place. He wanted to capitalise on the evidence that the consumer within the upper echelons of the closed markets does have belief in Local food, “In the West, especially Europe, 60% of all consumers want quality, one third of whom will pay a premium for it. Surely we can take that trend and run with it in WA?” Max believes that the state should try harder to strengthen this trend.

Dr Felicity Newman, who lectures on Food and Culture at the Centre for Everyday Life at Murdoch University http://wwwmcc.murdoch.edu.au/cfel/cfel_mccmembers.htm was also keen to emphasise the two tier class-based system of food choices. She believes those that can afford to make the quality choice are beholden to support small, non-industrialised growers. Felicity drove the debate onwards by asking how this might be spread this further throughout the state to generate connection to local producers and encourage consumers to value local produce.

After the first round of answers it was pretty clear that the consumer can have an impact on food production, on the one hand through complience and through choosing to spend their food dollars on local produce of the best quality on the other. Food Sovereignty is an issue of interest to a considerable base of consumers who want to make thoughtful choices and to be connected to what they eat for health reasons and to show support to local growers. The next question is “How do we make it easier to connect the producer and consumer?”

That question will be addressed in part two of this report after some field-research. I set myself the practical task of buying all the ingredients for Saturday’s dinner grown within 100 kilometres of my house.

I feel roast pork coming on, but then I usually do.