The fewer the ingredients the more precise the science.  Making at home Yogurt at home proves this rule. They say the great Balkan and Caucasian strains of yogurt bacteria Lactobacillus bulgaricus and Streptococcus thermophilus,  were carried across continents as sour smears on scraps of linen. A dollop of the original culture was spread on to a piece of cloth, allowed to dry and wrapped in a waxed paper, secreted next to the portrait of the village Saint and a lock of Granny’s hair ready to begat Yogurt in a new land. 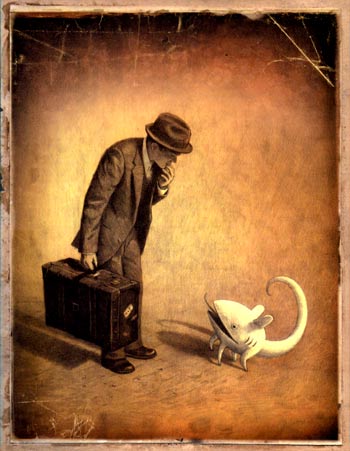 Perhaps the man in Shaun Tan’s charming book The Arrival had something similar in his case , something that was the organic fabric of Home, that could be revived and replicated ad infinitum with the right amount of care and attention. He would need to revive the dormant bacteria, make them feel happy enough to flourish and sire a never ending river of the Good Stuff from the Old Country.

Of course, he could never match the yogurt of his homeland perfectly  – the lactose and protein content of his adopted country’s milk would affect the bacteria’s chances of fermenting lactic acid which would in turn affect taste and texture. The protein profile of the casein molecules in the milk would depend on the species of animal, bovine, ovine or othervine

The virulence of the naturally occurring background micro organism present in the air of his new kitchen as well as the relative humidity and ambient temperature of his new home would all contribute to the yogurt’s success. It may be just milk and bacteria, but there are many, many factors to tweak and trial before the right product can be produced.

Making Yogurt at Home  it has taken Crackling about 5 years and many, may tweaks and pinches to finally replicate a commercial Greek Yogurt product satisfactorily

Crackling used to be so conceited as to suppose it was merely a case of taking a scoop of commercially produced yogurt, mixing it with some scalded milk and keeping it warm for four hours. Wrong. Previous attempts resulted in watery, stringy and even cheesy stuff. Something in the milk wasn’t right.

One of the hardest things to get right is the texture of yogurt. Sure, straining the whey contributes to the thickness, but the lactic acid produced during bacterial fermentation can only coagulate the protein it is given to work with. And most ordinary milks just don’t not have enough. They need extra protein and adding powdered milk, 5% by volume does the trick.

Nor can the blue top milk be heated to 90 degrees celcius by guess work, even after a 30 year relationship with gas stoves, Crackling had to swallow pride and invest in a thermometer. However, the old French tip of testing to see if the milk is cool enough to add the starter culture is true: put your finger in it and if you can hold it still for a count of ten then that’s 45 degrees. Those canny, French, n’est pas?

Each bacterium stimulates the other to grow,  ferment and alter the acidity, structure and flavour of yogurt and the only way to get the right conditions is by  tweaking time, temperature, pH, protein content and offing any background interlopers in the milk or atmosphere. And that is a lot of extrinsic factors to consider.

This is how it was done: In pictures:

Take 750ml of full cream fresh milk and add and bring to 900 and hold it there for 10 minutes. This helps to deter  any background bacteria that may compete with the specialists Lactobacillus  and Streptococcus for the lactose sugar in the milk. It also helps to denature the whey protein lactoglobulin and make it more inclined to cluster with the other protein casein and form a fine gel texture.

Now it is time to introduce the starter culture to the prepared milk, in this instance supermarket Greek Yogurt. Coles refuse to tell me which strains of bacteria I am setting up in 5 star accommodation but I’ll bet it is is Lactobacillus bulgaricus and Streptococcus thermopihlus.

It is important not to drop fridge-chilled starter yogurt in to warm milk; the bacteria will suffer shock, stress and refuse to ferment the lactose sugar in to acid and gas, and that is what we need them to do. So spoon the starter yogurt on to a plate and let it come towards room temperature while the milk is cooling.

Nice and thick, isn’t it?

Blend the milk and starter culture together, transfer to a plastic air tight box and wrap it in a tea-towel. Put this in a small insulated bag, and wrap again and leave in a warm spot in the kitchen. My friend Lin from Northern China tells me they incubate their yogurt in the boiler room of their 500 family apartment block. Aim to incubate for 40-45 degrees for 3 hours

After 6 hours, I took the yogurt out, reckoned it was still above body temperature and strained it through a clean tea towel in to a colander.

the crack is a good sign, this yogurt is firm and the gelation has worked, thanks to the extra protein from the milk powder

So what’s been happening for the last 6 hours? Well at first the Streptococci had the run of the milk, using the lactose to ferment lactic acid until the pH reaches around 4. At this point the more robust Lactobacilli take over and bring the pH up to about 5. (However, under refrigeration the bacteria continue to produce lactic acid and the yogurt grows sharper and develops a fresh, green flavour.

For Greek Yogurt, around 25% of the fluid not trapped in the gel network of milk proteins needs to be drained.

Drained whey, keep it to drink or use in place of buttermilk in baking

The strained yogurt is put in to a storage container, the drier portion is scraped off the tea towel and given a quick whisk to homogenise the final product. It is indeed, looking nice and thick.

It is important to leave your yogurt out at room temperature for 20 minutes which gives the bacetria time to accilamitise to a lower temperature. If they were put straight in to the fridge they would suffer stress and possibly not continue to produce and ferment, or mature the flavour. In fact I give the new batch of yogurt 48 hours to settle down.

Once Crackling had swallowed pride and put in the time and effort the resulting yogurt was not only the perfect texture, but matured like a fine wine. After a week in the fridge, the green apple notes the bacteria had produced more acetaldehyde to give the green apple flavoured notes of good yogurt and all hints of  powdered milk had disappeared. Verdict at breakfast two days later: Perfect. Feeling farily smug.

With porridge, rhubarb and orange compote and brown sugar